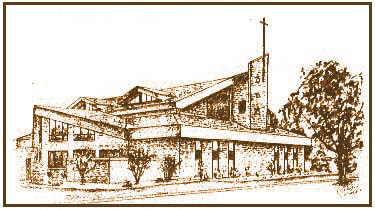 Our history begins with folding chairs, fundraisers, and families who find each other in  Frankenmuth, Michigan, a strong German Lutheran community in the Saginaw Valley of mid-Michigan.  In 1967, the idea of establishing a Catholic Church in Frankenmuth gained momentum from the hard work and generosity of a small group of Catholics, their strong faith and the hospitality of local leaders. Today Blessed Trinity is a vibrant parish with membership that spans three generations.

The founding 45 families met in the local high school gymnasium for the first Mass on April 23, 1967, establishing Blessed Trinity as a mission of neighboring St. Christopher’s Church in Bridgeport. Later that summer, members purchased 7.5 acres of picturesque land on Tuscola Road, marking it as the future site of Blessed Trinity Catholic Church. The location of Sunday Mass moved in 1969, when members of the Frankenmuth United Methodist Church agreed to share their new social hall. That generous arrangement continued for the next seven years but the goodwill and covenant established between the two churches endures to this day.

Following a successful fundraising drive, groundbreaking for Blessed Trinity’s own church building took place in the summer of 1974. Construction included the church, sacristy, offices, and a social hall that could be converted into eight classrooms for religious education. Father Charles Keho celebrated the first Mass on April 11, 1976.

Parish life thrived as the membership and local community grew. The church, under the leadership of six different pastors, established itself as a parish with meaningful liturgies enhanced by prayerful music. Various parish groups sponsored religious and social events for adults and teens, expanded faith formation offerings for children, and volunteered for community events including the annual Frankenmuth Bavarian Festival. Blessed Trinity established the tradition of contributing a percentage of its annual collection to a wide array of worthy organizations that help the larger community, including Saginaw’s Rescue Mission and Eastside Soup Kitchen.

The church complex expanded eastward in 1993 to include six permanent classrooms, a parish library, offices and additional seating. Then, at the turn of the century, the parish took on a five-year expansion project that resulted in the building of a new church to the south of the original structure. The original church was remodeled to include a large gathering space, classrooms, youth ministries area, administrative offices and storage. Father Fred Kawka celebrated the first Mass in the new church on Sunday, Nov.14, 2004.